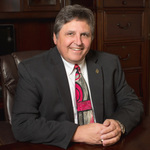 Robert R. Faucheux, Jr., founder of Faucheux Law Firm, has practiced law in LaPlace, Louisiana since 1975. Robert was born and raised St. James Parish. He graduated from Louisiana State University in 1972 with a degree in Business Administration. Robert earned his Juris Doctor degree from Loyola University New Orleans School of Law in 1975.

Robert maintains a diverse practice, representing clients in all types of civil and criminal litigation in the State and Federal Courts of Louisiana. Robert is also chief counsel for the Town of Gramercy. Robert is a member of the Louisiana State Bar and Federal Bar Associations. Robert also served in the state legislature from 1996 to 2008 representing St. John and St. James parish in the former district 57. Robert overees every aspect of the firm's practice and works closely with the firm's other attorneys.